You are here: Home / Internet / 3 Facebook Tricks No One Tells You

Hello Everybody! Today is a good Monday morning (at the time of writing this post). And right now there are three Facebook tricks lingering in my head which I’ll very quickly share with you all. We all know when it comes to Facebook tricks, everyone of us gets excited. Because Facebook is such a huge company with its web application of the same name and then there are Millions of tricks unknown to us. But don’t worry I’ll share every trick I know in each and every future posts. Below are some simple Facebook tricks no one tells you because most of them don’t know it either. After you finish reading this post I know you won’t be one of them. All eyes on the screen and here we start.

Let me guess! You already know that you cannot open locked Facebook Profile Picture. Using Facebook Privacy Settings, any Facebook User can lock his Profile Picture i.e. DP as known in Pop Culture. Lets take for example, John has a crush on Jenny, he likes viewing Jenny’s Facebook Pictures but unfortunately John isn’t Facebook Friend of Jenny. Now Jenny uploads a beautiful looking profile picture of her; which John cannot view in fullscreen because its locked. Now what should John do? If your situation is somewhere near or far away from John, let me tell you this amazing Facebook Trick that displays Jenny’s Profile Picture (or the one you wish to view) in Full Resolution.

I generally recommend using a dimension of 1000px by 1000px which usually displays the whole profile picture. You can add any value but keep the pixels same throughout.

I think you easily got this trick, now lets move on to other two Facebook Tricks.

Take a deep breath and pat on your back because you’re about to learn something new here. Every account on Facebook has two passwords.

How does this works?

Nothing some sort of rocket science.

One your original password, other the one you type when CAPS LOCK is on. So instead of ‘ShadowMonkey’ you type ‘sHADOWmONKEY’ OR ‘jOHNcENA123’ instead of ‘JohnCena123’ you will still log into your Facebook Account.

For a couple of years, one new feature update that happened to Facebook’s Image App is the theatre effect. 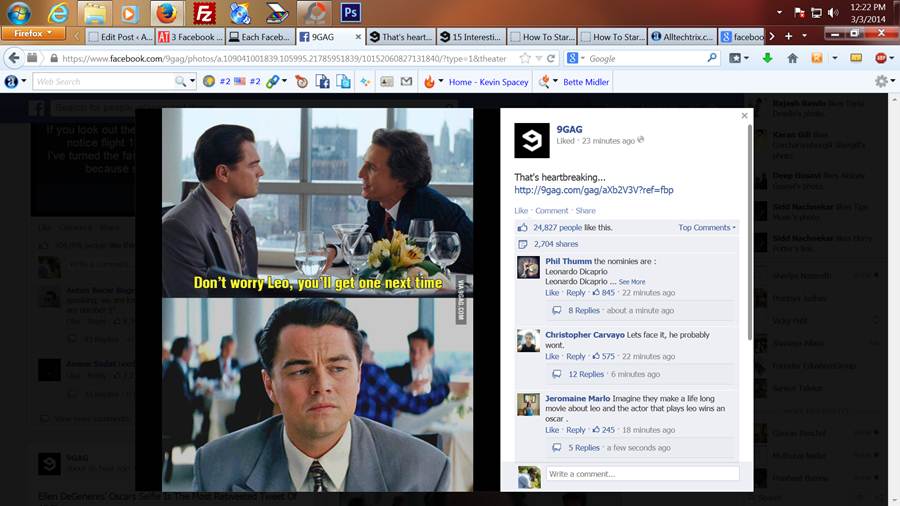 Now what if I tell, You can disable this effect. Yeah you can with just a simple tweak.

All you need to do is reach out to the image url and remove ‘theatre’ from it.

Just remove ‘theatre’ from image’s URL and you will get Facebook’s Long Forgotten Image App Interface.

I hope you enjoyed the article. If you did; then don’t forget to show us some love by sharing it on social networking sites like Facebook, Twitter and Google. If you have any problem with any of these trick; let us know in the comments section. If you tried them then let other readers on AllTechTrix know your experience. We love to hear from you guys.