So after we have Amazon Diwali Dhamaka and Amazon Appiness Day, we now have Amazon.in participating in the Great Online Shopping Festival i.e. GOSF 2014 organized by Google. Out of the 450 participating stores in GOSF 2014, Amazon.in is one of them and a major online retail giant. Just like the Amazon Diwali Dhamaka and Amazon Appiness Day, we expect to see great Amazon Deals on the eve of GOSF 2014 which starts from 10th December, 2014 till 12th December, 2014. Amazon.in is 100% ready for the event and we do expect to see a huge blast from this American Company owned by CEO Jeff Bezos. Well…

The Great Online Shopping Festival was brought to India in 2012 and was celebrated as an Indian answer to Black Friday’s and Cyber Monday’s. 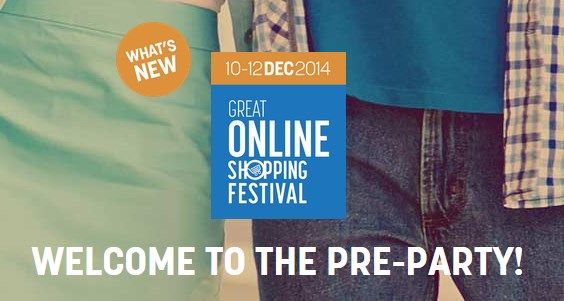 Google has been organizing Great Online Shopping Festival from 2005 and has brought the same idea here in India back in 2012 and this is the third year of GOSF in India.

This year we are able to see 450 Online Retailers participating in the Great Online Shopping Festival who will be on their wits end to offer the best deals for the consumers and let them have a great time during 10-12th December, 2014.

To get the best deals be hooked to this page.

If you keep following this page then you wouldn’t have to worry a bit.

We all know the Amazon.in is a huge portal and they are going to have great deals and discounts throughout the whole site.

This does leaves a customer baffled to find the best deals across various kinds of products.

On this page itself we’re going to give you the best Amazon deals throughout the GOSF 2014.

You will be having Great Shopping Offers and moreover you can get 10% Cashback from all your purchases via HDFC.

The best thing here is Amazon.in is offering 1.5 Crores Products from over different main Categories.

We even expect to see huge Re. 1 Products Sale which will add a great bling to the offer.

We even expect to see great discounts on Memory Cards and Pendrives @ Rs. 99 only on Amazon.in

Keep glued to this part of this where you will find all the great deals, offers and discount offered on Flipkart Big App Shopping Days live from 8-12th December, 2014

These are currently the best deals available on Amazon.in

We hope you find the best deals on Amazon for GOSF 2014 and you get the products you want to buy.

Hope the site doesn’t crashes like Flipkart and is ready with backup to avoid any dirt on them like Flipkart’s Big Billion Day.

We really have high expectation from the event and just expect the best.

Have a great day all.