You are here: Home / Android / Top 5 Android Launcher for your Android Smartphone + BONUS

Hello Folks! Today I thought I should come up with a new kind of post. Android Launchers. Yeah! you’re right. People on internet talk about various android apps and games but we all forget Android Launchers.I am sure the launchers listed below will make sure your phone gets another look from people you know and don’t know. Be ready to answer the question, “How did you do that to your phone?” Below are such launchers which guarantee a second look on your phone. Take a deep breath and start reading.

You can resize, move, delete, add, change color, change the color scheme in this Android Launcher just like you can do in original Windows Phone OS 8. I’ll describe this as a counterfeit version of Windows mobile OS :-).  In this Android Launcher, most options are customized similar to Windows Mobile OS. 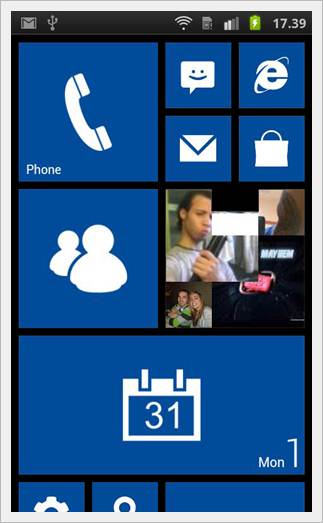 If you do need a change from complete Android Looking Launcher and Interface, this is for you. I bet you won’t be disappointed by it. Similar to the original OS; Launcher 8 too runs smooth and in my demo test didn’t hanged or slowed down as much as default Android Launcher did. My suggestion, do give it a try. It just won’t disappoint.

Personal tip: I had fooled most of my techy and geeky friends into believing; I had ported Windows Phone 8 OS into an Android.

Well if you are talking about snappy Android Launcher and forget Nova Launcher, then you are missing a lot.

Since there aren’t stupid apps and bloatware, you get, only what’s important (and required). This android launcher feels snappier than Android’s own UI. 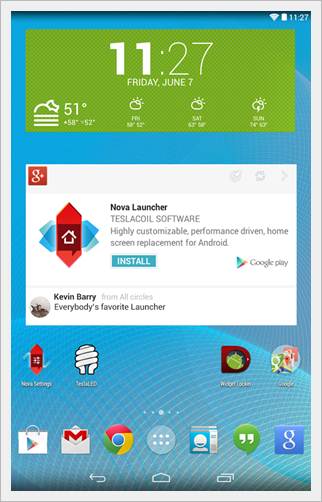 In simple words I can say; Nova Launcher is a slightly tweaked version of Original Android JellyBean. Thought most of the features are available in free version. A Pro-version upgrade opens all exciting features. Still the free version is worth giving a try.

Personal tip: Nova Launcher runs smoothly on smartphones with RAM of 512MB or lesser than that; doesn’t hogs much system resources.

Smart Launcher takes third place in our Top 5 List of Android Launcher. The moment you install Smart Launcher you know your phone starts to look a whole lot different.

Don’t expect it to deliver complex and long list of widgets on the homescreen. Instead Smart Launcher has only one homescreen. Just like one shown in image below. 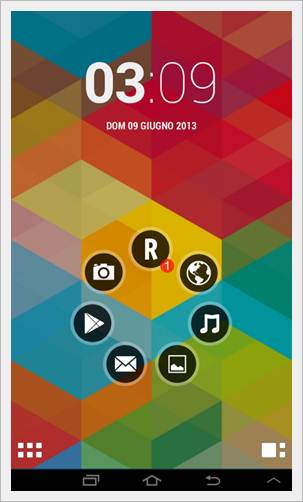 With no frills Smart Launcher is one of the most sophisticated designed launcher. As soon as you install this launcher. All your apps are grouped accordingly. Your messaging app stay in one group, games stay in another and so on. In start it can be little confusing (and tricky) to find an app but it does has search option; to search the app you’re looking for.

It supports portrait mode but Smart Launcher looks great when used in Landscape mode; which gives it whole lot of real estate. Using in Landscape mode spreads out the icon proportionately making it easier to use.

Smart Launcher has some premium features. Some pro features are additional homescreen widgets, gesture controls and more for $3.99. You can find free and premium homecreen for Smart launcher on Play Store itself.

Personal tip: Depending on how you use your smartphone; you might love Smart Launcher or downright hate it. Me being a power user; Smart Launcher was more simple to my taste.

Buzz launcher is not about the whole user interface. But its about the beautifully designed custom homescreen by its users.

You get beautiful homescreen designed by Buzz Launcher users. And guess what you can create one too and upload it to Buzz Launcher. Words can’t describe how beautiful this launcher is. 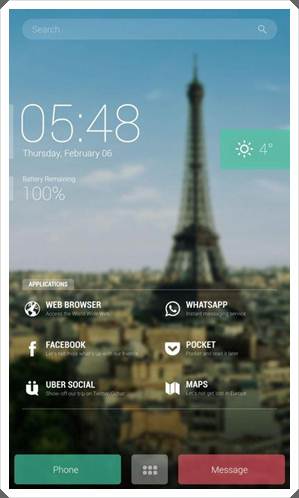 Personal tip: Currently Buzz Launcher has 40,000+ homescreen to select from.

GO Launcher EX is the most oldest of Android Launcher. It has been there since the inception of Android. It made your boring Android Froyo and Gingerbread look cool and still does. 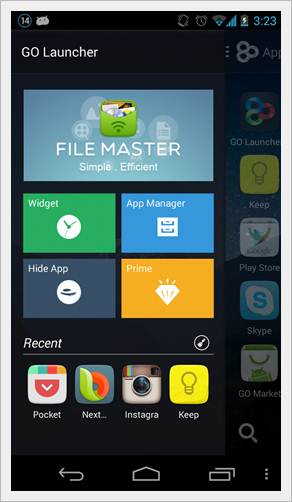 You can’t be disappointed by using GO Launcher EX. If you haven’t tried; I recommend using it once. GO Launcher EX has these beautiful looking Android Icon Set which are much better than Default one. Since its developed by Japanese developers, do expect it to have varied colors, reflections, neon shades and use of gradients.

Personal tip: GO Launcher EX hogs more system resources. Avoid if you have RAM less than 512MB. It will crash many times.

Hey Wait! Do you want to buy smartphone under Rs. 20,000 or want to know the best five one. We have it here. 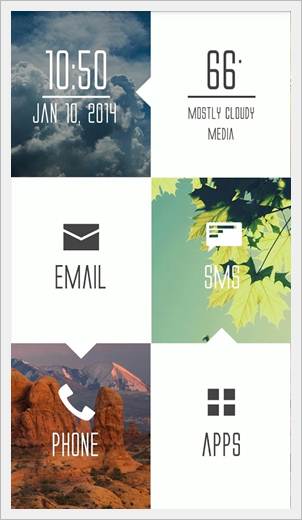 Themer is that one Android Android Launcher which is still in beta mode but works like a pro. Its somewhat similar to Buzz Launcher but also a lot different.

The similarity to Buzz Launcher is, it contains pre-made custom themes. So instead of spending large amount of time creating your own theme. You can select any one of the pre-made theme which suits you mood.

Many themes are available with Themer and more custom user-made themes are added day by day. But unlike other Android Launchers listed above; Themer asks for your Facebook or Google+ account at first use.

Themer, on first use asks about your favorite and most used apps; giving you a quick access to them. Themes seen on Themer are all free (and beautiful looking too). Themer is that one Android Launcher which gives your phone a unique look. Its that one Android Launcher which demands another look. I am damn sure you would like it, your friends would and even your parents too.

Do give it a try and I’m sure it won’t dissapoint.

Personal tip: Watch the video and do give Themer a chance to show-off.

Must See: How to take Webpage Screenshot in Android

This was it for the Top 5 Best Android Launcher. I hope you all liked it a lot. Do let us know your views if you’ve used anyone of them. Or which launcher you think will be great? Share this post with your friends on social networks like Facebook, Twitter and Google+.

We love to hear from you.
[/sociallocker]