You are here: Home / Internet / Top Torrents movie Tags you should know About – Part I

Admit it! You love to download movies from torrents site. No matter what kind of movie it is, which language its been recorded in or from which country it belongs to we love to download and watch movies from different torrent site. All you ever do is search for movie name and download from the first link available. But then there’s more just than movie name you should search for on torrents site to find the favorite movie you want to download. What I’m talking about is torrents movie tags which describe what kind of movie print you can expect from the torrent file. Read below to know more about torrents movie tags.

Now what the heck is this torrents movie tags?

Don’t worry torrents movie tags isn’t rocket science but just a step more to find the perfect print of movie or any kind of video you are looking for. Just for an example: Consider you are looking for the perfect of a movie released two months ago, you search on torrents, find the movie torrent file and download it and when you open it the movie print is all shaky and bad just like shot from a handy-cam or have you ever seen tags shown below while searching for movies. 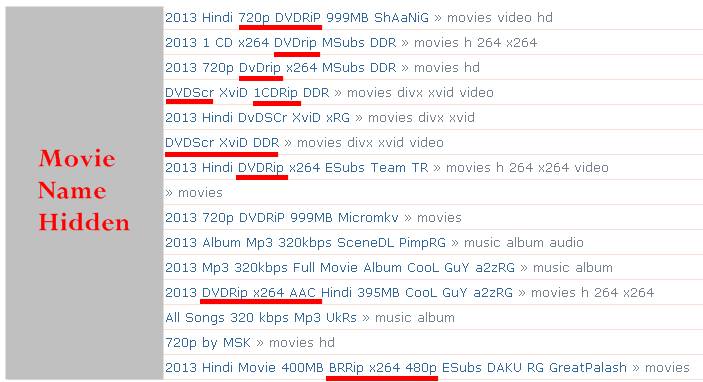 Don’t know what these terms means; don’t worry I’ll tell you meaning for each one of them shown in above picture and other terms too in random order

A CAM rip is generally a theater rip which is shot in a theater using a handy-cam. Sometimes the handy-cam is placed on a mini tripod but mostly it is kept on a seat and which results in shaky picture and most of the times you’ll see silhouettes of people standing or moving in the film print. Audio is usually taken from the on-board mic and is very noisy and lacks detail. Due to this the audio and video quality is very poor. Mostly empty theaters are used to shoot a CAM Rip film and these types of print are available from next day after the launch of movie.

Telesync is similar to CAM Rip but instead of an on-board handy-cam mic it uses an external mic which does increases the sound reception quality but due to background noises the sound quality doesn’t get noticed much. Mostly telesync cameras are placed next to or below movie projector but that doesn’t guarantee good video quality. Mostly it is shot in empty theatres using a professional camera and the picture quality depends upon the camera used. Recommended to download movie sample first.

A pre VHS tape, sent to rental stores, and varied different places for promotional use. A guard is equipped on a VHS tape, and is typically during a 4:3 (full screen) a/r, though letterboxed screeners ar generally found. the most recoil could be a “ticker” (a message that scrolls past at rock bottom of the screen, with the copyright and anti-copy phonephone number). Also, if the tape contains any serial numbers, or the other markings that might result in the supply of the tape, these can ought to be blocked, sometimes with a black mark over the section. this can be generally just for a number of seconds, however sadly on some copies this may last for the complete film, and a few may be quite huge. counting on the instrumentation used, guard quality will vary from wonderful if done from a master, to terribly poor if done on AN previous VHS recorder through poor capture instrumentation on a derived tape. Most screeners ar transferred to VCD, however a number of tries at SVCD have occurred, some trying higher than others.

Same premise as a screener, but transferred off a DVD. Usually letterbox , but without the extras that a DVD retail would contain. The ticker is not usually in the black bars, and will disrupt the viewing. If the ripper has any skill, a DVDscr should be very good. Usually transferred to SVCD or DivX/XviD. Below is an example of DVD-Screener and Screener

Above is DVDSCR print and below is just Screener. Mostly DVDScr print looks high saturated and slightly blurred with ghosting.

Blue-Ray BRRIP’s and BDRIP’s have been around for quite some time. These two are remarkable in the sense that they’re compatible with standalone home DVD players (with DivX/XviD support), XBOX 360, PS3, and other external peripherals.

These BRRip XviD and BDRip XviD files allow anyone to burn HD-quality Blu-Ray ripped movies on regular DVD media, and playback on most conventional DVD players – without the headaches of re-encoding or DVD authoring. There’s just one catch – you’ll likely need an HDTV to take full advantage of the superior video quality.
BRRip = An XviD encode from a Blu-Ray release (i.e. a 1080p *.mkv file).
BDRip = An XviD encode directly from a source Blu-Ray disk.

Mostly Blu-ray rips exists in resolution of 1280X588 and 1920X940 and is mostly found in .mkv and .mp4 formats. These Rips are almost clearn prints and are meant to be viewed on Full HD Displays. A BDRip or BRRip can have size from 700MB to all upto 15GB.

This was it for the part I and will be back with other not mostly used but existent movie tags on torrents. If you liked it share it with your friends on Facebook, Twitter and Google+. Have suggestion or question let us know in the comments section. AllTechTrix loves to hear from its users.