Since myself being an engineering student, having loads of friends and Whatsapp being the primary medium to chat (since we’ve buried SMS). It becomes very hard to stop raining of messages and sound of notification tone alerting one after another. This affects heavily during exam time as it becomes impossible to concentrate on studies during this flurry of messages and Whatsapp Notification.

Since I had term exams last week, it was important to find a way where I could deactivate Whatsapp or keep it in non-active state but still receive every message from my friends whenever I want or once I finish studying.

There one secret of Whatsapp that not many people know which enables to do what we are about to do now.

When someone sends you a message through Whatsapp, it’s first sent to Whatsapp Server and then it is received on your smartphone. There’s a big secret surrounding the Whatsapp double ticks.

The first tick means the message is sent to Whatsapp server whereas the second tick assures the sender that message is received by the receiver.

Suppose you send a message to your friend at 4PM; if at that time his cellphone is switched off, so if the message is sent to Whatsapp server you’ll see only one tick. Now your friend switches on his phone at 8PM and receives your message hence at 8PM you’ll see the second tick.

I hope I was able to explain you this concept properly.

There are 3 ways in which you can deactivate Whatsapp and still receive Whatsapp Notification.

This is the most basic and hassle free way to deactivate Whatsapp and once you start again your data connection you will receive all your Whatsapp Notification.

The best part is anyone can do this, won’t you? But the worst part is all your other services are also affected which require Internet connection.

For some people this might work well and most of my friends turn off their data connection while studying but this doesn’t works for many (not for me). There are so many other apps which provide important updates, so this really isn’t a feasible solution.

So lets move on the next method, shall we?

Your Android Smartphone first needs to be rooted in order for Greenify app to work.

Though the app may get installed on a non-rooted smartphone but still of no use as it requires super user permission to hibernate applications.

Using Greenify is very simple and easy. There isn’t much messing around if you have a rooted Android Smartphone and Greenify installed in it.

Once you launch the app, the interface is pretty basic and simple.

Now to deactivate Whatsapp, all you have to is select Whatsapp and tap on sleep button at bottom. Refer screenshot below to get a better understanding of the Greenify application. 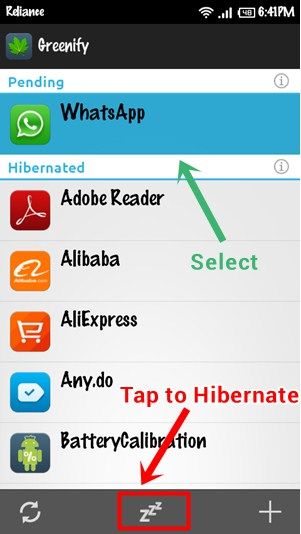 With Greenify you can not only deactivate Whatsapp but also deactivate other applications from which you receive frequent notifications like WeChat, Line, Hike, Gmail. Even other apps that you think will be a nuisance while studying or doing important work can be hibernated using Greenify.

Now I can really understand that most of you will have many concerns regarding rooting (your smartphone) as it voids warranty. It might even brick your phone and for people who aren’t that technically advanced might not even want to try rooting.

If you fall in this category, the third method is your ultimate savior.

This is an integral but almost never used feature in an Android Smartphone. Force Stopping an application (also referred as FC) is the basic method to deactivate an application or in our case deactivate Whatsapp.

To force close an application go to… 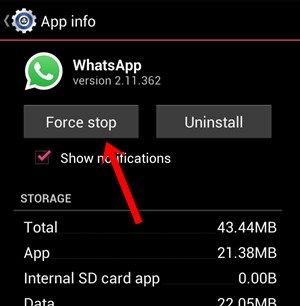 By force stopping Whatsapp or any other application, it will deactivate it till you open that app again. So if you Force Stop Whatsapp, you will stop receiving Whatsapp notification till the time you open Whatsapp app.

I hope you enjoyed this article as much as I enjoyed writing it for you.